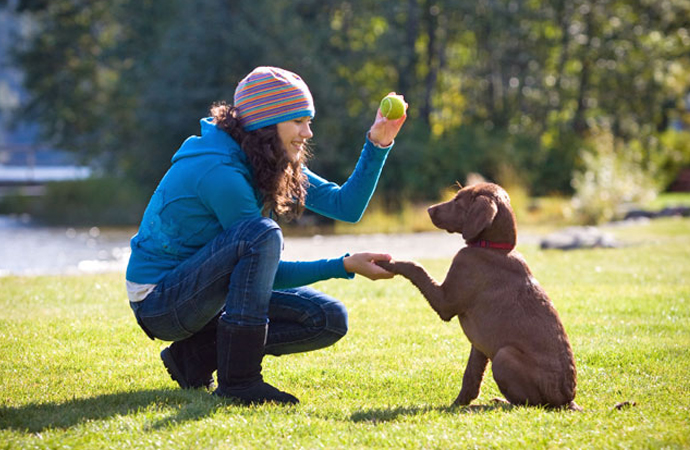 Training humans can be tough, but with patience and dedication it can be achieved with even the most stubborn of homo sapiens companions. If you’re having trouble training yours, start with the basics:

Wedge yourself between the cushions of your human’s couch, then vomit all over an area no one would ever think to check before sitting. When your human gets home from work hours later, watch in awe as he instinctively plops his tired ass down RIGHT in your puke puddle. Tell him, “Good boy!”

Wait for your human to get really excited about a party one weekend, then when you notice he’s just about to head out the door, suddenly spaz out like a crackhead for no reason and “accidentally” knock over his 50″ flat screen. If he immediately cancels his plans and…stays…home to deal with this crisis, pat yourself on the back (with your tail): that is one well-trained human you’ve managed to raise there, friend. You should be proud.

Deep down every human loves to play fetch, sometimes they just need additional motivation to participate. Try this: next time your human is late for work and getting dressed in a hurry, jump up and snatch one of the socks out his hand before he can put it on. Then, run to the other side of the house and toss it as he frantically chases after you like a crazy person. See how passionate he becomes? I told you it was in his nature! Almost beautiful, really.

Eat the Sports Illustrated swimsuit issue before your human has a chance to look at it, then wait at the door for him to come home after another long day at work with magazine debris all over your stupid face and your tail wagging like this is all just a fun little game. Can you believe all those loud noises you just got him to make? Aww, the little guy is trying to bark, just like you randomly do at 2 am every single time he has to get up early the next day! Could he be any more adorable?

Get in a fight with the dog next door over a worthless piece of garbage, then force your human to call-in sick and take you to the vet to patch up your wounds. Six weeks later, watch for the bill to arrive, then bark out, “Bang!” just as your human opens it. Finally, laugh in ecstasy as your little jokester collapses to the floor, as if you just shot him in the chest. Who knew humans had such a keen sense of humor? The greatest trick of all.